Yakir and I had a lovely dinner with friends at Upper West  The dimly lit restaurant was full, with a lively party going on in the patio section.
Chef Nick Shipp told us that the restaurant is a neighborhood place and that quite a
few of the customers are regulars. Much of the produce used at the restaurant, he said, is from the nearby Santa Monica Farmers Market.
When we told him that we like the colorful paintings on the walls, he told us that they are by local artists and they are for sale; the
selection changes from time to time.
On the menu we noticed dishes with Middle Eastern flavorings like tahini, sumac and preserved lemon, American favorites like mac & cheese, bread pudding, and key
lime pie, and dishes with East Asian and Mexican flavors. “Our style has
been described as culinary potpourri,” said Chef Nick.
We enjoyed eating a variety of dishes–some traditional and some creative,
and our menu had plenty of vegetables, herbs, and fruits. We look forward
to going back.

* Hawaiian hamachi crudo- The hamachi, a Japanese fish, was served with roe and a sauce of olive oil, yuzu juice, and mustard. On the plate, there was a smear of tasty chipotle-carrot mousseline made of carrots reduced with orange juice to which chipotle and butter were added. The hamachi was topped with melon slices, red pepper slices, basil leaves 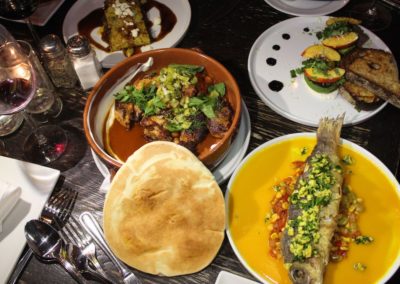 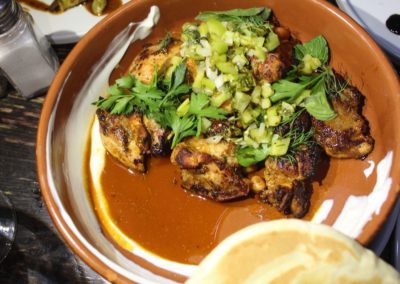 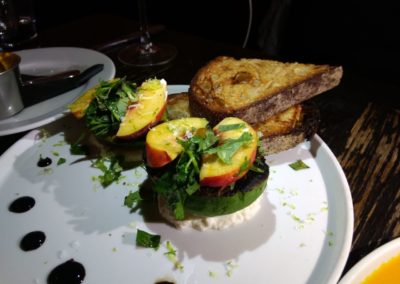 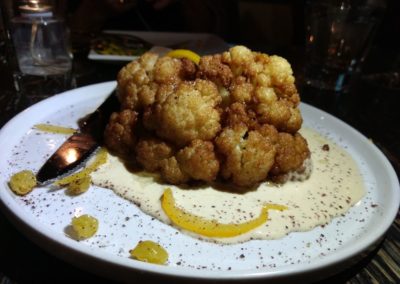